November 09, 2020, Fifth batch for this sick Playlist #100undergroundtracks2020, time for these 9 bands with the track that I enjoy the most and already locked a place here (45 already) #showlove

40.- Basic Plumbing As You Disappear

NO YOUTUBE LINK FOR THIS TRACK, instead this interview released last week

The whole 45 tracks are here in this Playlist

1 Madzen I Choose (Selfishness and Whatnot’s) Mexico City alternative / indie you surely don’t know nothing about this guitar player guy but I’ve been following through his career, only 25 years (almost) and a few bands behind he’s back as a one man band  under this new and cool moniker  (Madzen referes to the balance and harmony of being positive and negative coexisting at the same time) and yesterday unveil this track, his debut single and besides that I like the sound I’m hoping he gets his shit together and we have this track at Spotify and be part of this Playlist

2 Vanessa Silberman All The Kids New York USA I just can’t undersand that this is still here in this Playlist last year I love her single I Got a Reason and this new one is even better I hope you like it too and support her.

3 We Are Only Humans Ones West Salem Delaware USA alternative / beddroom pop this guy has been droping singles constantly and this one is good.

4 FEVER Electric England five piece indie rock only 3 singles released until now first one 6 months ago, I’m hoping this guys put an album together soon but maybe we still have to wait for this a few months. In fact I can’t find this track at Youtube so I pick the second single Money Love

5 The Vitrines Diamons in Her Eyes Southampto England alternative / indie rock only two guys but for now is perfectly clear that they don’t need more for this fierce sound. Just over 200 followers today #support

6  The Maybe Next Years Called Out Tempe Arizona USA Alternative Punk band with this song “about feelings of betreyal and being left behind by a friend” hard not to feel indentify this happens to all of us.

8 Shadeemus Desert Days London a new band that yesterday present their debut single this Project originally composed by Scott Xylo and artista that I’ve been following the last couple of years he was part of this Playlist as a solo artista and now back with this new band with a great desert sound rock and a bit of psychedelia that you should love it!!!

9 BFA Perseverance Indie artis / post punk  / dark This guy also need your support a few singles in his back but by far I think this is his best work yet give him a listen and make your own opinion.

10 Jason Wilber If We Were Free USA This artista is more in the folk acoustic genre and this track is simply beautiful. #support

Enjoy it and have fun this weekend remember to keep yourself save and sound!!! 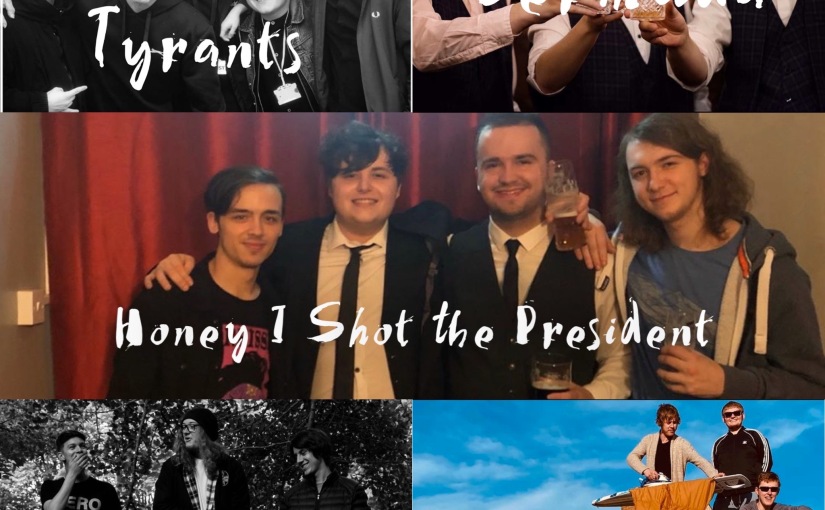 Well did you miss me? I did miss you but here I’m once again and bringing to you some great and new bands to share with you, this time lets focus in 5 Birmingham bands with #LessThan1000Followers (remember that when I use this tag I’m talking about Spotify followers and obviously my Spotify Playlist about this kind of bands that I love so much).

Honey I Shot The Presidente (HISTP) an alternative rock band creating post break upo anthems, from the heart of the Birmingham music scene bringing out many ranges of styles and influeces (form The Strokes, The Streets, Hendrix, The Cure and many more) toghether to create something beautiful.

The past February 28 (1 day after my birthday….don’t worrie I know you didn’t know) they release 2 solid singles at once part of the upcoming EP Dragonfly this are the tracks.

This EP is coming next April 3rd or maybe sooner stay tune and if you enjoy their music rembmer to support them in the way you can do it. For now only released Understending

Tyrants Emerging from the Black Country a young, energetic alternative punk driven four pieces whoseuparalleled live experiences are gradually releasing to the world through their singles, with influences from bnads such as Idles, Bilk, Estrons, Gaffa Tape Sandy and inspirations drawn form genres such as Classic Punk, groove-driven rock and hip-hop vocal delivery, this guys saw the release of their first single Arpons & Catnip this past January. They plan to drip-feed more singles across the year, continuing with next release in late April.

Smokin Eskimo this guys are waiting for this virus to go because they have some exciting gigs coming up, they’re at the slade rooms in wolverhampton and Jimmy’s Liverpool supporting the Jack Fletcer Band, at the Sunflower lounge in brum supporting Honey I Shot The President and a headline gig at The Clarendon in Wolverhampton (wolvo). Just this past sunday they’re in the sutdio recording some new tunes, in their own words “we got this new tune called dynamite and it’ll propa get you dancing” (we can’t wait for it)

Bermuda A three piece Alternative-Rock band not from Bermuda but from Birmingham taking inspiration from bands such as Highly Suspect and Nothing But Thieves with only two singles out but pretty awedome both, hope we can get something more ASAP

After Midgnight is an Alt Rock band formed back in 2018 also with only two singles released, both from last year, same here, hoping more for this year their influences: imagine if Nirvana, Smashing Pumpkins, Blink-182 and Green day had a baby….. they are kind of that! https://open.spotify.com/track/485DykxYgzfZFv35sbqcCK?si=zymqgD0qQwOhIL8t_iLkrg

Enjoy it, stay safe and have fun!!!

Hi y’all I’m new here and I don’t want you take me wrong about the titled of this post it’s more about my presentation (not really talking about me) but you know I need to give you some background.

I’m a freak music lover, I can’t stop spreeding the word (the music) if I enjoy it let you know for sure…one way or anothter. I only wish you can enjoy the music that I like as much as I do and in this way show you some new, cool, hot, awesome and undiscover bands or artist.

That’s kind of my signature, I believe my Playlist #LessThan1000Followers https://open.spotify.com/playlist/7vuKIgXTCZbs24ecgzQNM9?si=cgv8yrcxQ8G1jhxaiXWZPw

A Playlist that I’ve been working for the last almost 3 years, it’s constantly (daily) updated, I try really hard to keep the closer to 1K tracks/artist and less than 1 year released (even this way is hugh don’t you think). Always the new tracks adde goes on top so every time you go there you can find fresh new music.

You can find me out there Instragram, Facebook and Twitter as @jpgchief I know I’m a strange case and it’s hard to keep up with me but you always can catch me any time you can or want.

I wanna share with you my first band and newest discovery, they´re Cathedrale a Frech band that sound like a band from Manchester, a little punk, a little indie rock with their debut album Houses Are Built The Same on their way out March 27th lead and debut single Gold Rush ready to go recently released here the video only 12 listeners at Spotify 30 followers (I’m one of them) super excited waiting for next track or album. https://youtu.be/nK9WF65SPv8

If you have any comments I’ll be waiting.